There is war in my country. 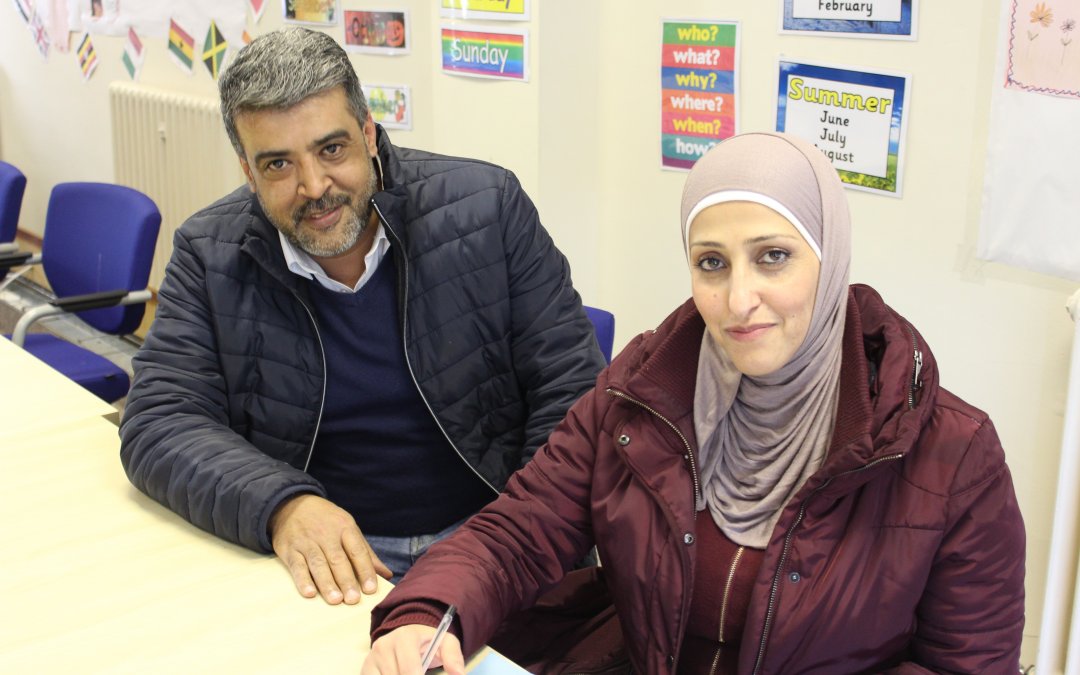 Walking into Wolverhampton’s bustling Refugee and Migrant Centre we help a young woman up the stairs who’s struggling with a toddler and his pram.

Greeted by Steven Bayliss, Project Co-ordinator, we’re given a tour of the giant workspace:

“If there aren’t people queuing down the stairs, we’re probably quiet.”

The initial waiting room is crammed full of people, all races and all ages, as they’re seen to one by one.

“Anybody here has just turned up today. This can be anything from immigration issues or just a letter they don’t understand. From this point everything is fed upstairs for more in-depth work such as supporting people into work and education.”

Sitting in on one of the Centre’s ‘English Speakers of Other Languages’ (ESOL) classes, you can see the enjoyment that the participants get from learning.

All eager to test their English we spoke with Ghousoun, a refugee who recently fled Syria with her husband and children:

“Before I came to this country, I had no English, all I knew was some words, A B C, hello!

“It’s hard because in my country we don’t speak English, I want to speak good because conversation with people is good, and I like to talk!

“I’ve been coming here for 1 year and 8 months. RMC have helped me a lot with forms, CVs and when I need to telephone for a GP.”

It’s hard to comprehend that just 2 years ago Ghousoun had to leave her country and home:

“There is war in my country, it is not safe. Here is safe.

“In Syria my children didn’t go to school and they had to stay in the home and don’t learn anything but in the UK my daughter goes to school, and my son goes to college.

“I’m very happy here because it’s safe, more people are polite. When I go somewhere, and they know I don’t speak they tell me ‘it’s ok’, they wait, understand and they help me.”

Ghousoun and her family are making the most out of a stressful situation, seizing opportunities with both hands:

“Me and my husband are both studying and after I learn more English, I would like to go to university and study Adult Education.

“My daughter and son like medicine but they need more support for learning. Last year my daughter did her GCSEs, her marks were good in English and Maths but Science she needs more because the words are very difficult!

“Her teacher told me ‘she has very good English!’ and that was after 7 months but my son’s isn’t as good because he’s shy! But when I go to the shop with him, he’s always speaking!”

“The biggest barrier is language. We get doctors, dentists, accountants and lawyers from Syria and it breaks people, they get here, and they realise they’re nothing.

“People think they can come and build a new life and then they’re told by the job centre ‘you’re worthless, you’re nothing go and get a warehouse job.’

“Until people have got their language skills, ideally above an A-level standard, which could take them years, they can’t even think about re-training. Even then it’s virtually impossible because they’d have to go to university as well.”

Its clear that Steven has drive and is proud of the work the organisation is doing. The work is funded by our BBO Community Matters programme:

“The BBO project itself is really good, it’s given organisations, like us, the capacity to deal with some of the most vulnerable people in our areas.

“Wolverhampton is a multi-cultural city and that’s one of the few things it can be proud of!”

The Big Lottery Fund uses money raised by National Lottery players to help communities achieve their ambitions. From small, local projects to UK-wide initiatives, its funding brings people together to make a difference to their health, wellbeing and environment. Since June 2004 it has awarded £8.5 billion to projects that improve the lives of millions of people.

The BBO project has received £129,000 of funding from the Big Lottery Fund and the European Social Fund as part of the 2014-2020 European Structural and Investment Funds Growth Programme in England. The Department for Work and Pensions is the Managing Authority for the England European Social Fund programme. Established by the European Union, the European Social Fund helps local areas stimulate their economic development by investing in projects which will support skills development, employment and job creation, social inclusion and local community regenerations. For more information visit https://www.gov.uk/european-growth-funding.